Ya you see it right! Google uses offline ads (below the line ads as well).

Until like a month ago, when marketers worldwide mentioned about Google 411 offline ads appearing on highway i’ve started to notice offline ads by Google. 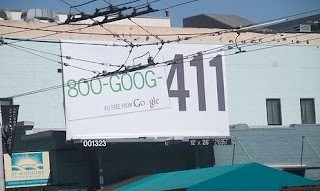 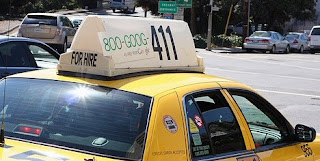 The reason why it amuses me is because of Google’s 10 things or their core philosophy, in which the very first thing for Google is that they want to “Focus on the user and all else will follow“
Google search engine’s popularity is hardly because of any marketing effort but rather word of mouth advertising. People find the Google search engine useful, they can find what they are looking for faster and they don’t need to browse though pages of ads before seeing any natural search results.

Well after seeing the offline ads by Google promoting Google 411, which is basically a voice enabled local search service, i saw another ads by Google. This time it is in Singapore context 😀 and it’s about Adwords.

The ads was on Digital Media magazine, published mostly in Singapore and Hong Kong i believe. 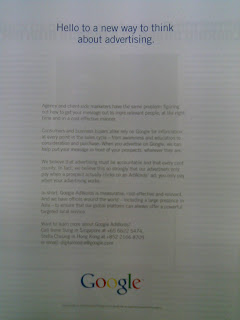 “Hello to a new way to think about advertising

Agency and client-side marketers have the same problem: figuring out how to get your message out to more relevant people, at the right time and in a cost-effective manner. Consumers and business buyers alike reply on Google for information at every point in the sales cycle – from awareness and education to consideration and purchase. When you advertise on Google, we can help put your message in front of your prospects, wherever they are. We believe that advertising must be accountable and that every cent counts. In fact we believe this so strongly that our advertisers only pay when a prospect actually clicks on an Adwords ‘s ads; you only pay when your advertising works. In short, Google Adwords is measurable, cost-effective and relevant. And we have offices around the world – including a large presence in Asia – to ensure that our global platform can always offer a powerful local service. Want to learn more about Google Adwords? Call Irene Sung in Singapore at +65 6622 5474 Stella Cheung in Hong Kong at +852 2166 8709 or email digitalmedia@google.com”

Well, looking at the above offline ads, one can deduce a number of things:

Google may put several offline ads on magazine before to promote Adwords in Singapore but well this is the first time i saw so if this is not a big news for you, please forgive me 😀

I dig a little bit deeper and find out that previously, when Google put offline ads, it’s mostly to recruit employee, not to promote its advertising platform.

Below is an example:

a billboard that asked you to solve a Math problem: find the first 10-digit prime found in consecutive digits of e. If you visited the site and answered other complicated questions, you were directed to Google’s jobs site. (From Google Operating System)

Another thing to notice is that since Google just announced its Q3 revenue increase of 57% compared to Q3 2006, an increase of 9% from second quarter of 2007!!! Such an amazing figure and Unlike Yahoo or Microsoft or many other companies, Google spent only 8% of its revenue on sales and marketing in 2006. You can refer to a great article ” Google sells ads but won’t spend much on them” by Associated Press for more in dept information.

Anyhow, to conclude, i just want to share with you all the offline ads in Singapore by Google to promote Adwords. I will follow the process closely and hopefully will be able to give some insights when the story progresses….