Marketing Magazine reported about the Raffles Place Internet hoax today and it pissed me off.

For the benefits of those, who are either not in Singapore or haven’t heard about the Raffles Place hoax, i will start from the beginning.

On 21st Apr 2008, a video was posted on Youtube regarding Ghost Sighting at Raffles Place.
Well it’s not a fantastic video with scary image or anything but the scene is Raffles Place and Singapore is small.

Marketing magazine reported that “The video directed viewers to a blog, supposedly started by three amateur ‘ghostbusters’, and in the next few days it was posted on Stomp. It was then picked up by the daily press and made the front page of Shin Min Wanbao while Lianhe Wanbao featured an article on the ‘ghost sighting’ in its main news section.“

After that you know the viral effect, people started sending the link from YouTube to their friends, friends of friends etc… and in the end, the original video received about 230,000 views.

The video even made it way to Channel 5 and Channel U.

To spice thing up, they even probably hired a few bloggers to write article about whether the video is real, so on and so forth.

Then after that the story slowly died off as many other local stories of the type.

For some strange reasons, i felt very uneasy when i read about $100k spent on Raffles Place hoax.
So it’s reported that the video is fake and there is actually a Recruitment company who hired McCann Worldgroup Singapore to produced the video and started a viral marketing campaign.

While they succeed in creating a viral campaign and even received supposedly Free coverage in Channel Five and Channel U, most of the people who view the news or the video have no idea that it meant to promote for a Recruitment firm !!!

I am asked myself the question of what the objectives of the $100k campaign are. Was it branding and if it was about Branding then did they succeed?
I did a keyword research against the Recruitment company and “Raffles Place Ghost”using Google tool, target audience is Singapore and the language is English:

As you can see in the traffic trend above, the name of the company didn’t receive significant amount of searches in April compared to the last 12 months.
“Raffles Place Ghost”, the keyword at the bottom, clearly only receives search volume for Apr since Google does not record any substantial historical data. It seemed like a decent amount of searches done in Apr against that keyword too.
The keyword was searched more times relatively compared to the Recruitment firm.

So to me, if the objective of the $100k ONLINE campaign is Branding, the result is still a big question mark.
People didn’t seem to search for the company name more Online even though there was another video a couple of days later saying that the Recruitment firm is behind the ads.

As for the marketing message or tag line, Do you understand what they tried to convey?
Have you thought of “you shouldn’t work late” idea at all after view the Ghost Video???

Certainly i don’t have a complete picture to answer the question about the success of branding so i will leave this as that.

I can’t disclose the level of traffic using the Paid Version of Hitwise here so i can only show you what i did using Alexa.
Again, please note that Alexa is far from being accurate but if the site ranking is below 100k then you can see the traffic trend from Alexa and it’s quite alright.
Unfortunately the site rank is 949,812 so Alexa has no traffic trend record. 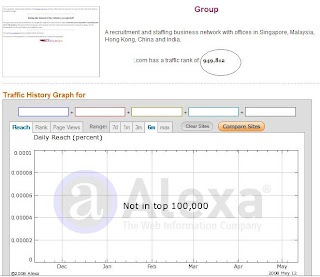 I think internally the answer to this question can be very easily since they (the Recruitment firm) should monitor the traffic to their site.
(I can’t see the use of any analytics tool because of the way the site is coded. It looks to me that the site is using AJAX technology since the URL stays the same through out).
Well on the report done by Marketing Magazine, i didn’t see any numbers related to the increase level of traffic to the recruitment firm either.
They only included in the number of views the Video on YouTube received.

I again just from my understanding that since they are a Recruitment firm, they will need job seekers to upload their resume Online and Employer request for staff Online as well. In any case, the Raffles Place Ghost campaign is an online campaign.
Whether or not there was an uplift in terms of Online applications or phone inquiries in Apr 08 as the result of the Raffles campaign, i can’t answer since again i don’t see any number (even in terms of per centage) from marketing magazine report.

This question, unfortunately, can only be answered by the firm itself
I questioned whether they went extra mile to create a separated phone number when they run the $100k PR/marketing campaign to measure the effectiveness of it.

From my humble opinion, what missing is a simple PPC campaign in Apr and even now.
I didn’t have visibility on what happened in Apr so i couldn’t say for sure whether they had a campaign running. However when i checked today in Google by typing in their brand name or “raffles place ghost” i didn’t see any ads so i assume that they didn’t have anything on for Apr either.

To me this is such a WASTE. A company spent $100k on a viral marketing campaign but then didn’t take advantage of it.
It’s somehow clear that their target audience is people who use the Internet. (If not why bother to create a viral campaign using YouTube and Bloggers in the first place??).
They succeed in attracting people to the Video, made people search for it in Google/Yahoo. However i think they didn’t do a good job in:

All of the above can be easily taken care of by using Search Engine Marketing on Google or Yahoo.
People know about the Video, they are going to search for it on Google/Yahoo, tried to watch it. No one will remember the exact URL of the link on YouTube.
When they search on Google, if an ads appear saying that company so and so is behind the hoax, we want to convey the message that no one should work late until you see a ghost hence you should contact us for your career needs etc…

Of course the timing of the ads on Google/Yahoo needs to be after they made it public that The whole Raffles Place Ghost is a hoax and it’s a marketing campaign.

In short, regarding Raffles Place Internet hoax, i could do a much better job in terms of investigating the effectiveness of the $100k ONLINE Campaign if i could disclose the information from the Paid version of Hitwise or i have access to the Recruitment firm traffic data.
Yet, from what i see so far, going through different marketing objectives, i doubt the so called “huge success” of that campaign. And if the company gave me that $100k dollars, i think i may be able to do something with it that can substantiate by numbers….

If you have any comments, feel free to drop them here.