In 2007, i wrote “10 things about Singapore Online Landscape” to serve as a guide for those who are new in Singapore and would like to have an overview of the Online environment.
At that time, i used publicly available data in 2006, which was outdated so i intend to give a brief update again here.

Please note that all the data below are from Statistics Singapore, Infocomm Development Authority of Singapore (IDA), Hitwise and comScore unless otherwise stated.

If you are interested in the absolute numbers, as of mid 2008, Singapore had about 4.8 million people including citizens, permanent residents and foreign workers (from C level to blue color).
So that works out to be about 2.9 million internet users.

It would be even more meaningful to start comparing Singapore and other countries in the region: Malaysia, Thailand, Indonesia, Philippines and Vietnam.
Due to lack of official data, i use figures from Internet World Stats site. While being the unofficial source, this would be enough to show relative comparison.

Indonesia has the lowest penetration rate yet highest number of internet users due to the enormous size of the population compared to other ASEAN countries.

The above stats couples with the fact that Singapore household income (after inflation) grew substantially in 2008 (more than 10% on average) promise a stronger household access to Internet rate in 2009.

The Broadband penetration rate has increased 133% over a five year period from 2003-2007!
As for Vietnam, from VNNIC, total broadband subscribers is around 2.4 millions, which is comparable to Singapore in absolute numbers but far behind in terms of percentage.

4. What Singaporeans and residents do when they are online?

Just to put a little context behind the figures, the below table is for the US market from U.S Census Bureau

While online shopping rate amongst internet users in Singapore is at a whopping 35% in 2007, the same figure for the US is only 6%. This, again, proves that Singapore is one of the most wired countries in the world. Individual Internet Usage by Age Group – Communication Activities in 2007 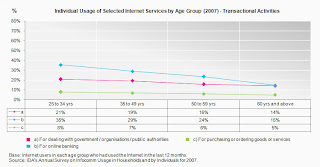 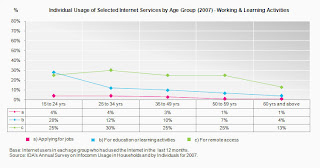 According to comScore, Singapore Internet users conducted 171 million searches in Sept 08 or an average of 105 searches per searcher in Sept 08. This works out to be 1.71 million unique searchers in Singapore during Sept 08.

Google is the number 1 search engine in Singapore, with 71.04% market share (Hitwise Dec 2008 based on volume of searches). Yahoo is a failing number 2 with 23.2% market share
Together, they command 94.24% of the total market share.
It’s clear that the search engine war in Singapore is over with Google & Yahoo are the two most popular engines.
I am actually very amazed to learn that Singapore Press Holdings even started to develop another local search engine not long ago with the code name RedNano.
I am looking forwards to seeing how the business model will pan out since the population in Singapore is so small and Google& Yahoo already have so much market share.

Well, that should be about all for this update about Singapore Online Landscape.
I am actually on holidays at the moment back in Hanoi but couldn’t stay away from the computer for so long!

Looking forwards to the US inauguration ceremony in the next 2 hours and the coming “Tet” (Chinese New Year) !