The fact is you only hear about Facebook or MySpace or Friendster show how popular Orkut is in this region (SouthEast Asia).
However, the truth is neither Facebook, MySpace or Friendster is popular in Vietnam.
As i mentioned a couple of times before, Yahoo! 360 used to be widely popular before the decision to shut it down worldwide and replace it with Yahoo! Mash.

A lot of people in Vietnam already blogged about the current issue with Yahoo! 360 and the lack of a replacement so i am not going to repeat the issue again. Local social networking platforms haven’t been able to convince the majority of Y!360 to switch over yet.

However, things may change now. Google’s just introduced Vietnamese Interface for Orkut.
If you go to Settings, Language and change to Vietnamese, you will see something like this 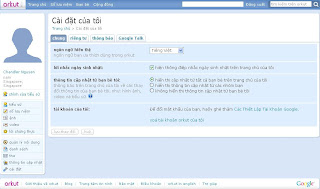 It’s still very early for Orkut in Vietnam. There are not many vietnamese communities on Orkut yet. 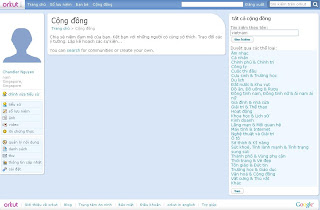 Right now, you can only see the different categories in Vietnamese, yet no active communities in Vietnam.
The good thing is Google offers a good degree of control over your personal information, your age, email address, profession, university etc…
You can choose to let your friends, friends of friends, or everyone to see your personal info. 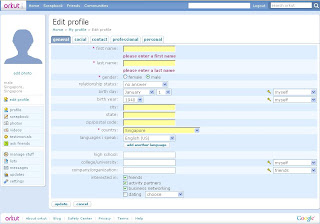 I personally agrees with the approach by Facebook which is to give greater control over your personal information when it comes to social networking and Google is doing the same thing.

If you have time, you should watch the recent keynote by Facebook Founder Mark Zuckerberg. He mentioned a great deal about privacy.

Through the grapevine, i understand that Google hired an agency to handle Orkut PR activities in Vietnam so we will see some interesting thing soon…:)

Okay, enough about Orkut, as for myself, i only use Linkedin actively. I think it’s a great platform for professional networking. Give it a try if you haven’t!

Bye for now,
Chandler
P.S: I am wondering if i am the first one to blog about Orkut in Vietnamese, Yey!

5 comments for “Orkut in Vietnamese”