One of the most common objections from Vietnamese clients is Invalid click.
It’s so serious that many advertisers use it as an excuse for not using Pay per Click.

Before going straight to how to handle this objection i just want to give a brief understanding of this “Invalid Click” objection in Singapore context.
About 3-4 years ago, this objection was very common, especially amongst Small and Medium Enterprises. Since their monthly/daily budget was so small back then, they really concerned with invalid clicks would eat up a big chunk of their budget.
For example, if an advertiser’s monthly budget is $300, or $10/day, then with a Cost per Click of $0.5, he/she can only have 20 clicks per day. He/She is afraid that the competitors may click on the ads 5-6 times throughout the day, which account for 30% loss due to invalid clicks.

Having said that, my main point here is Invalid click is definitely a VALID concern. Yet, it shouldn’t be the main/only reason why advertisers decide not to use Pay per Click.

What i am trying to get to here is the commercial intent behind a click or the lack of it.

Once the commercial intent behind each click is measured, advertisers can easily calculate Return on Investment of their marketing campaigns (be it display media, edm, ppc etc…) and being able to justify whether or not invalid click is still a big concern

2. What are invalid clicks

Most of the materials from now on are taken from Google Adwords Learning Center Invalid Click section or a Third party report “Alexander Tuzhilin’s report on Google Invalid Click”
I would suggest you go through these materials to have a complete picture. Due to limited space, i only highlight some key points below.

“Invalid clicks are clicks generated by prohibited methods. Examples of invalid clicks may include repeated manual clicking or the use of robots, automated clicking tools, or other deceptive software. Invalid clicks are sometimes intended to artificially and/or maliciously drive up an advertiser’s clicks and or a publisher’s earnings”

If advertiser uses Google Analytics on their site then obviously Google will know all the post click data like bounce rate, time on site, page view/visit etc… hence i would imagine it makes Google job easier to filter out invalid clicks.

There are a couple of ways to handle this objection, a non technical and technical way.

This is clearly show how effective PPC is in delivering on advertisers’ objectives.

Many advertisers in Vietnam want to see the IP addresses of delivered clicks so let me explain more about this.
First of all, looking at IP address alone is not an ideal way to investigate invalid clicks.
It’s very common that many computers may share the same external IP address. It really depends on the service providers and how the network is being set up.

Another example if Internet cafe or public hot spots, each device most probably does not occupy a unique external IP address either. One of the simple reason for this is that there are limited number of IP addresses being assigned for each country, each region etc…

Hence, even if you see from a report that from a particular IP address, there are 10 clicks in the last 1 hour, it does not mean those clicks are all invalid clicks.

This team is real. The famous blogger, Matt Cutts, is from Google’s Webspam team.

Please take a minute and ask if any local media owners in Vietnam or international publishers (sites) actually set up teams to combat invalid clicks, meaning paying full time engineers and specialists to just look into how to improve invalid click filtering techniques.
If you are currently putting banners on those portals, sites then should you be alright with advertising using Google platform as well? 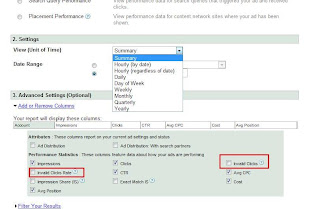 Besides, how many local media owners provide this type of report at this level of granularity. It would take a lot of effort to fake these numbers at an hourly level on a global platform for so many clients 😛

This is another measure by Google to show how serious they are regarding Invalid clicks.
Imagine how much efforts Google needs to put in in order to do this: developing algorithm to analyze log file, making sure that money being refund is justified from a business stand point because these are revenue loss to Google, a proper finance process need to be in place etc…

The same question for other local media owners, publishers applies here. Which media owners/publishers/portals actually refund advertisers due to invalid clicks? Further more, it’s not justifiable to argue that display banner incurs lesser invalid clicks as a percentage compared to Pay per Click either.

In short, while invalid click is a valid concern, i hope the above sharing is comprehensive enough to show that this concern shouldn’t be a barrier for advertisers to start using Pay per Click in Viet Nam. Google clearly puts in a lot of efforts to combat invalid clicks, in comparison to other media owners. But again, if you have any comments/feedback, feel free to email me at chandlerblog@gmail.com