There have been a couple of new development since my last update in Mar 2009. The first update was back in November 2008.

Unlike other updates, this time i will only include data for Asiapac including Japan (APJ)

According to comScore, Yahoo! attracted more than half of all searches conducted in Japan in Jan 2009 with the highest frequency of searches/searcher as well.

Not only that, we look into the absolute number and the growth from Jan 2008 compared to Jan 2009, Yahoo outperformed Google as well

So it means if you plan to run a paid search campaign (PPC) in Japan, you have to include Yahoo JP.
However, since Yahoo has around 100 million internet users (<= a huge market), you can select either Google/Yahoo if the budget doesn’t allow for both.

The situation in Korea is completely different. Google and Yahoo are NOT the top 2 search engines. It’s NHN corporation (naver.com) and Daum The data is taken from comScore press release Jun 2009 “NHN Corporation is Most Visited Web Property and Host to the Most Searches in South Korea”

Yahoo (Overture to be exact) has partnership with NHN Corporation (Naver), in which Naver displays Sponsored links from Overture on top of its sponsored links on the search result page 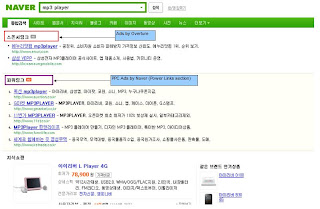 As you can see from the picture above, Overtures ads are on top of PPC ads directly from Naver.
There can be up to 5 ads from Overture on top so the percentage of clicks going to those ads by Overture is the majority

I haven’t come across an public authority, 3rd party source that verifies the exact market share per centage of each search engine.
Baidu claims that they have 73.2%, while Google China has 20.8% only.
China IntelliConsulting Coporation and Analysys International reported that Google should have around 22% of the search market share while Baidu commands 63.4% to 65.8%.

No matter what the exact share percentage is it doesn’t affect the way we plan a paid search campaign much. We still need to do proposal for both search engines (Google and Baidu) and trying to understand what the potential return can be.
If you have limited budget then again choosing 1 search engine instead of working on both may be a wise choice.

If you are adventurous, you can give other search engines a try like sogou for example. It has decent amount of traffic for some of the clients that i am working with.

The latest data that i have is still Jun 2008 with Google leads the way (81.4% share)
Data is from comScore.

The fight between Google and Yahoo was over quite sometime ago with Google has more than 90% of the market share in Australia according to Hitwise.

Singapore has seen the rapid growth of Google in terms of market share and the steady decline from Yahoo
I started reporting on Singapore search engine market share sometime back based on Hitwise data. Below is the stats over time

Yahoo is the number 1 portal in Hong Kong, there is little doubt about it.
However, when it comes to actual percentage of market share between Google and Yahoo, things start to get murky abit.

So far from what i have seen Yahoo is the leading search engine in Hong Kong. Most of generic searches traffic go to Yahoo.
However, Google claims that from Hitwise data in Feb 2009, Google is the number 1 search engine in Hong Kong with around 50% reach on Pageview. Yahoo is trailing behind with around 20% reach on Pageview.
Note: from Hitwise report, Google search total = google.com.hk + google.com
Yahoo search total = search.hk.yahoo.com + search.yahoo.com

Normal metric like percentage of searches that each search engine receives per month has not been publicly reported/verified so we can’t say with high degree of certainty which search engine is more popular.
To be on the safe side, when you play your paid search campaign remember to consider (not include) both search engines.

ok that’s about it for now… i will go and enjoy the weekend!